Do you know the history of the Vauguillettes area? 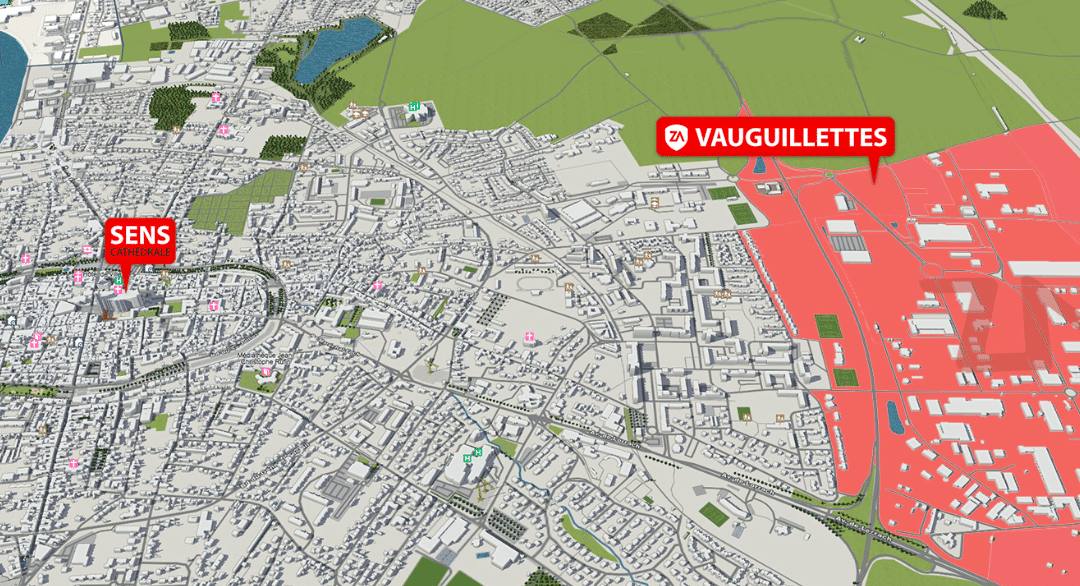 Euripole is located in the Vauguillettes area, in Sens, Yonne. Do you know the origin of the word Vauguillettes, or that of the rue de Chantecoq?

Bernard Brousse, living memory of Sens and professor, answered all our questions. Thank you!

The Vauguillettes area overlooks the town of Sens. In 1814, during the French Campaign, the town was bombed from the heights of Saint-Sauveur.
This area has both an agricultural and a religious past, which explains most of the names of its current roads.
While some of the names are clear enough, others are not, and there is always a degree of uncertainty in what is proposed.

The name is transparent here and is linked to the topography of the place and the presence of these numerous birds in the region. There is a "Côte aux pigeons" in Passy and Saligny.
We can add that in the past, one of the places in the territory of Sens where there were the most important plots of vines was the Côte aux Pigeons.

As is often the rule, this place where walnut trees were found is associated with the name of one of the owners at the time, Sieur Pompon.
Moreover, as for the Côte aux pigeons, there was a vineyard there. This is not contradictory, as walnut trees are often associated with vine plants.
One can think that the price of the Senegalese wine having fallen, the wine grower could compensate the least sale of this one by that of his production of walnut oil.

Augusta Hure writes that "Vau comes from val, vallis, indicating that the place is situated in a valley, or that it dominates a hillside where the land is lowered and water flows into the valley; and that "Vau names are attached to many names whose second term completes their meaning".
She adds: "Quilin, Guillain and Quil in Brittany answer cheerful and pleasant. These terms were applied to places sitting on a hillside or on a ridge, and often pleasantly dominating a valley.

The word "strike", of Gallic origin and passed into popular Latin in the form "grava", refers to sand, gravel.
Strikes are therefore places covered with small stones, sand or sandy soil.
A vineyard is mentioned in Les Grèves.

As its name suggests, this road leads to the commune of Les Clérimois.
This was only created in 1888 by taking part of the territories of the communes of Chigy and Foissy sur Vanne.
Augusta Hure wrote that "Les Clérimois, Cléri, Clairerie, Clérisses, Clérion, Clairion all have the same meaning; this one answers to: who receives a lot of daylight, clarity or who is luminous and transparent, if it is a river. »

We are in a high place, east of Sens, from where the rooster sees the sunrise and starts crowing.
There are two communes with this name, one in the Loiret, the other in the Aube.
A specialist in toponymy, Gérard Taverdet, attributes a negative value to this name, thinking that it evokes a land that is just right for this animal to crow.
There is also mention of a vineyard there.

The term Sancey is quoted in the form Sanceias in 980; we also have the form Sancy; it would come from the name Sanctien, this companion with Beauty and Augustine of Saint Dove.
The first three were martyred shortly before Dove by Emperor Aurelian in 274. A church built on the site of their execution was destroyed by the Saracens in 731. A second church was built at the place called Sanceias. It was later replaced by a hermitage dedicated to Saint Beate, which disappeared in the 19th century.

The word field comes from the Latin campus (plain, cultivated land) and refers to a ""stretch of arable land"".
As for the plover, it is a migratory bird whose name comes from the popular Latin pluviarius, "bird of rain". Plovers arrive in flocks around the rainy season in September and leave at the first frost.
We also have at Sens les Champs d'Aloup, i.e. the field of the Larks.
Birds are well represented in this Senegalese sector.

The Grahuche, from gravvucia or gravucca, is a by-product of the strike.
Augusta Hure specifies that Grahuches is a very common name in the old Senegalese language; it refers to a place scattered with stones or gravel and has its equivalent in the names of Chaillots, Chailleux, Chailleuse...
And as for the Grèves, vines are reported in the Grahuches.
The Grahuches d'Heuré are also nearby.

The furrows are the hollows in the furrow created by the plough and have the meaning of ploughed land.
Long furrows are therefore long plowed plots.
The vine was also present here.
The Longues raies are present in Sens, Collemiers, Soucy and Paron.

If in Sens, there are the High Musats, Mâlay the Great has the Low Musats.
In some documents we find Musa or Muza. Specialists suggest that this term is a possible variant of mura by distortion of pronunciation. Studies show that "ruin" would be the meaning of mura, a place where there are remains of walls. However, we are close to the Saint-Sauveur priory which was ruined during the Hundred Years War.

Another possible interpretation is related to the vine: musat would be a distortion of the word muscat, a grape present in our region as indicated in an article in the almanac of the town of Sens for 1825: of the 43 species or varieties of grapes grown in the district of Sens, there were four varieties of muscat: white, black, pink, Alexandrian with very large oval white berries, and Alexandrian with black fruit.

In 1838 Tarbé wrote: This chapel is situated in the east of the town of Sens, between the chapel of Sainte-Béate and the road from Sens to Troyes, in the middle of a rather considerable vineyard from which it would have taken its name. It was founded in 813, following others in 804, by Magnus, Archbishop of Sens... much loved by Charlemagne.
.. " " He surrounded this church with a cemetery, and made it the burial place of the canons; several archbishops were even buried there, starting with Magnus, who died in 817 ".

This church was given in the 12th century to the abbey of Saint-Jean (later a hospital) and erected as a priory. The building, destroyed and rebuilt at different times, disappeared in the course of the 18th century.
Several archaeological excavations took place on this site.
The church and the vineyards have disappeared, but the name has remained.

Théodore TARBÉ: Historical and anecdotal research on the town of Sens. 1838
Augusta HURE: Origin and meaning of some place names in the Yonne department.
1934
Toponomy of the region of Sens. 1939-1940
Pierre PARRUZOT : The Senegalese vine and wine in History. 1969
Sandrine LEFEVRE: Microtoponymic study of the canton of Sens. 1997